Its January. We're still a while away from pay day, the news is bleak and the weather seems to be playing games with our emotions and general health. Its hardly inspiring stuff.

So how can we climb out of the creativity crater which we unwittingly tumble into at this time of year?

Sometimes all we need to do is look at other industries which thrive on creativity and constant reinvention. For me, the fashion industry is a beacon, a shining example of an industry constantly pushing itself to produce something new and exciting; the next big trend.

Take a look at Dior for example. Christian Dior has been a classic Haute Couture stalwart, but as times have changed the need to present itself as a fashion brand of the future became increasingly important. And Dior did not shy away from this. Instead, the fashion house hired its first female designer who has delivered a new creative direction for the brand and firmly placed a fresh stake in the ground.

But new eyes are not always necessary. I recently watched 7 Days Out a new Netflix documentary, which in one episode goes behind the doors of fashion house Chanel in the lead up to its Spring 2018 Haute Couture runway show. In the documentary we see Karl Lagerfeld and his team push themselves creatively to deliver a collection and show unlike one that has never been seen before. And their passion for excellence in everything they create is simply a joy to watch.

It is this constant desire to produce something new and unexplored that the fashion industry does so well, and it is a behaviour that we should all be striving to emulate. Its is certainly easier to rest on our laurels and do what we have always done, but by pushing ourselves to deliver excellence at every turn is what is going to get us and out clients noticed.

So with Blue Monday behind us, perhaps we should all look to the example the fashion industry sets and apply a new lens to what we are doing. Let's always try to think differently and seek moments to wow at every turn, you never know what we could create.

Chiuri, set designer Shona Heath, and Lina Johansson, choreographer of the London-based Mimbre theatre group, together devised a show in which acrobats formed human pyramids around the models. “Honouring an idea of femininity that is powerful, free and determined,” they aimed for “an inclusive and feminist [show that] echoes Chiuri’s own active commitment”. Since Chiuri took over Dior, the influence of this venerable brand on fashion as it is worn on the street has become more direct. The “We Should All Be Feminists” T-shirts from Chiuri’s first show turned feminist-slogan T-shirts from an alternative fashion choice into a worldwide commercial hit that was picked up all along the high street. 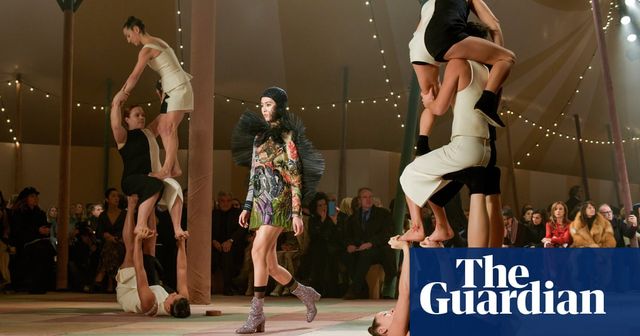 The show must go on, crowd or no crowd
Natasha Cobby