China is known for its extreme censorship, and this week it went one step further. The government has banned any mention or image on Weibo and Wechat of the popular plump, cute children's cartoon character, Winnie the Pooh.   The reason - bloggers have been comparing him to the Chinese president, Xi Jinping, to bypass the censors.

When Xi Jinping met Japan's Prime Minister Shinzo Abe, they endured one of the most awkward handshakes in history. Bloggers responded by posting images of Winnie the Pooh and Eyeore shaking hands with the exact same expressions. The first image to make this comparison, was when a tall, thin Obama walked side by side with Xi Jinping, which was replicated with an image of Winnie the Pooh walking next to his lanky friend, Tigger. Since then the comparison has stuck. Most notably, when Xi Jinping popped his head out the roof of his limousine to inspect the troops - a photo appeared online of a toy Winnie the Pooh popping out of his own little car. This was the most censored image of 2015.

The President will go to extreme lengths to protect his brand. Most world leaders may find it humorous to be compared to a lovable children's character, making them look a bit more human (something our current leader is certainly lacking in), but not Xi Jinping. His brand is all about appearing serious at all times, he doesn't do anything silly, he makes no mistakes, he is above the population, the single face of the communist party. So he will feel he needs to protect his brand at all costs, particularly ahead of the 19th National Congress of the Communist Party. The party cannot have anything bad being said of its leadership.

This is an example of how far the government will go to censor private companies within China, to protect its brand. The country's number one dissident, Liu Xiaobo - winner of the Nobel Peace Price, died in Chinese custody last week. Widespread news around the World, but most people in China haven't heard of him. Type his name into Wechat, and the person you're sending the message to won't receive it. Chinese web tech giants must toe the party line, with the government being given a back door entrance.

Although the government has banned Winnie the Pooh, I'm sure the people of China will keep on coming up with clever and creative ways to bypass the government censors.

The blocking of Winnie the Pooh might seem like a bizarre move by the Chinese authorities but it is part of a struggle to restrict clever bloggers from getting around their country's censorship. 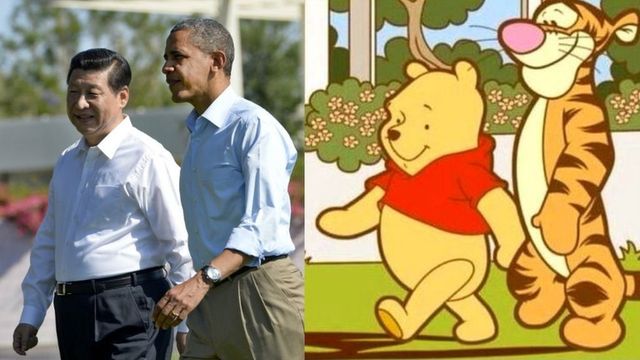