Last week, leading fashion house Balenciaga revealed it's latest handbag creation. However, fans soon noticed something familiar about the bag's style - it is almost identical to Ikea's iconic big blue FRAKTA bag. The comparison sparked a wild online frenzy among Ikea's loyal customers and Ikea, as always, responded in the most perfect way, with plenty of sass. And I'll tell you what, I blooming love it.

In fact, what's even more impressive is that the sassiness came just one day after the Balenciaga bag was launched; proving not just that news hijacking is still alive and kicking, but also that it goes down an absolute treat when brands get it right.

It can be all too easy to stick your head in the sand and ignore the world around you but as Ikea has shown here, keeping an eye on what else is going on can result in the most effective campaigns being born.

This isn't the first time that the team behind Ikea's creatives have got their news hijacking spot on - anyone remember their exchange with Kanye (http://www.itv.com/news/2016-08-03/we-could-make-you-famous-ikeas-hilarious-response-to-kanye-wests-collaboration-request/) ?! - and I doubt it will, and hope it won't, be the last.

Johan Holmgren, creative director at Acne, tells AdFreak that the response ad came together very quickly. “I wanted to act fast, so I called Morten Kjaer from Ikea Creative Hub. He loved the idea,” Holmgren says. “The day after the Balenciaga bag was launched, I said, ‘We’ll have the creative work ready within two hours.’ We then went to one of our fashion photographers, Anders Kylberg, and shot the bag in his studio, with that same feeling and lighting as the Balenciaga bag. That same day, we sent the finished work to all markets.” 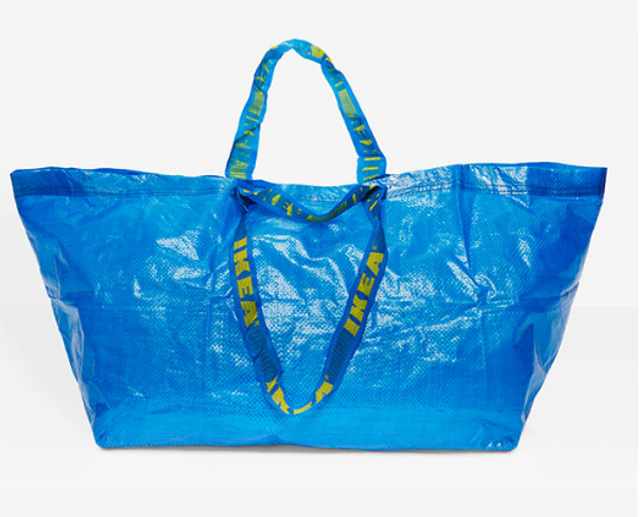 Ikea had a great reaction to @Balenciaga making a $2,145 version of its 99-cent blue bag: https://t.co/V6ARyKi1H4 pic.twitter.com/dNkNzbkcMJ

#Ikea had a great reaction to Balenciaga's blue bag via @Adweek https://t.co/3svFtmhXjU

Ikea responds to Balenciaga's version of their famous blue bag https://t.co/uDcPYbusPI (via @Adweek)