The premise of the Penn Museum's Global Guides programme seems simple. The museum hires staff, specifically docents (the name given to people who explain exhibits - who knew?), from the regions being showcased, to show visitors the artifacts from these regions. And, I suppose, it is simple....but it is also groundbreaking.

All too often, both currently and throughout history, museums have acted as monuments to colonialism. Imperial powers have visited, explored, and invaded countries across the world (many of which are now referred to as 'third-world countries') and have returned with all manner of wonders and treasures stolen from native peoples and cultures. They become exotic objects for viewers to marvel at, while the communities they come from lose a part of their heritage.

These exhibitions are sometimes put together with very little sensitivity for the cultures they represent: displayed for the eye of the beholder, as it were, as a temporary moment of amusement or fascination, without any weight given to an object's original meaning. Especially with regards to western depictions of 'the East', museum exhibitions have facilitated reductionist, stereotypical, and sometimes outright racist depictions of particular cultures.

Additionally, like in many fields of academia, museums have traditionally been the domain of the privileged: i.e. old, white men. This is not an uncomplicated statement, granted, and there are a number of different factors at play. But, regardless, situations in which only one type of voice is being heard are more susceptible to institutional prejudices and narrow-minded thinking.

Global Guides, then, provides a refreshing alternative. By hiring a diverse range of representatives to guide visitors through a diverse range of exhibits, we can restore meaning to objects that may previously have been showcased entirely out of context. The docents involved in the programme can provide a far more interesting insight into the artifacts displayed than someone with no experience of the culture behind them.

The museum's Global Guides have proved invaluable at enhancing the exhibits in a number of different ways. First-hand accounts of the countries showcased help to bring a depth of understanding that you'd struggle to find elsewhere. A huge breadth of language skills have helped the museum to translate documents from across the world. They have also helped with on-the-ground research into exhibits and artifacts, providing a unique insight into the regions they represent.

Many of the individuals involved are immigrants and refugees, who may struggle to get jobs elsewhere - and the grant that funds the scheme also helps these people to navigate employment details, such as filling out tax forms. Thus, both underprivileged communities and visitors' museum experience is greatly improved.

From a more cynical perspective, the programme has also benefited the museum by increasing footfall. Attendance has skyrocketed since Global Guides has been implemented, and a third of visitors have gone specifically because of the programme.

There is still a long way to go to rectify the cultural problems, both past and present, that many museums present. In fact, some may argue that all artifacts from other countries should be taken away from museums and re-distributed to their places of origin around the world. But, for now, giving back the regions a voice of their own certainly seems like a step in the right direction.

Imagine walking through a museum exhibit from the Middle East with a personal guide from that region explaining the artifacts. Imagine having the same experience as you move through galleries from different parts of the world, each time with a docent from that region who lends a personal touch by sharing first-hand perspectives. 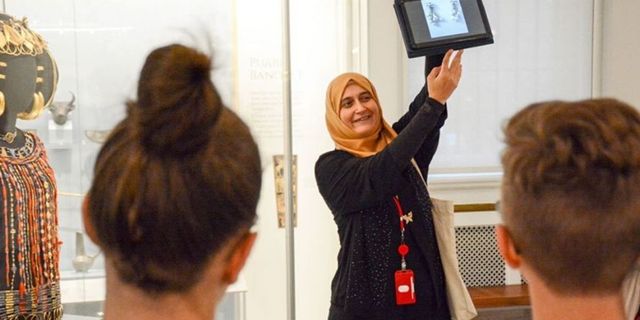