There is currently a stand off between the armies of China and India at the Bhutan-China border. Indian soldiers crossed into Bhutanese territory in mid-June to block Chinese soldiers from upgrading a road that Beijing says is within its borders, but which Bhutanese leaders claim belongs to them. This has resulted in minor scuffles between the two countries.

But that's not the important bit...the dispute has resulted in the two country's releasing propaganda videos through their official news agencies. In today's highly connected and digital world, it's interesting to see how governments are using video posted to social media channels to get their position across. Whilst using humor (or what they think is humor) to do it.

First China went on the attack, releasing a video on twitter called "7 sins of India". As a presenter lists India’s perceived misdeeds, the video repeatedly cuts to a Chinese man wobbling his head, wearing a fake beard and turban, and appearing to feign an Indian English accent. A sight you'd expect to see in a colonial-era comedy act or a bad improvisation on the darkest corners of YouTube.

India was quick to react, releasing an animation showing Chinese president Xi Jinping dancing to Gangnam style while dressed as Winnie the Pooh (he's often portrayed as Pooh in China to get around censors). The animation is a Bugs Bunny-style video following Xi, dressed in military fatigues, as he attempts to get the attention of a chuckling Indian Prime Minister Narendra Modi across the border.

Let's hope this border dispute keeps on delivering this kind of content for the rest of the world to enjoy (hopefully it doesn't turn into something more serious!)

Chinese state media have released a propaganda video that lambasts India over a border dispute, sparking accusations of racism. 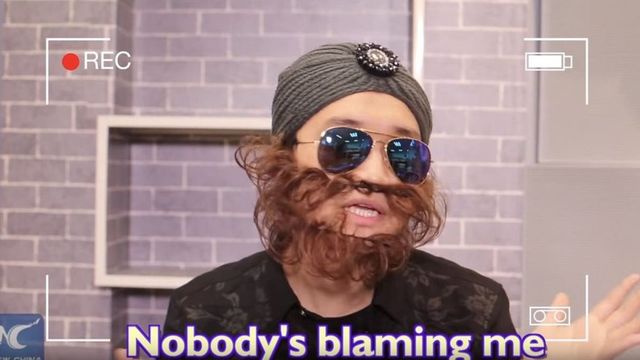