Silicon Valley promises to build a better world, the Tech Gods are unleashing technology to tear up the world as it is and create a new one – a process they call “disruption”. They claim they will better society, making us more connected than ever, spreading the wealth, and ultimately improving our everyday lives. But in reality is this really the case? There are dark clouds hanging over Silicon Valley. Yes – they are revolutionising the way we do things, but not necessarily for the better.

Firstly, these companies can’t be for the people when they rely on huge sums of money from venture capitalists.  They are valued at billions, when some have yet to make a single profit. To maintain their funding, they need to rapidly expand and aggressively grow their user base. If not, they won’t survive. This has been at the expense of the people they “employ” to make the companies work.

Take Uber as an example, they’ve encountered many problems in a very short space of time from sexism to rape allegations. But could it also be safe to say they have blood on their hands? Uber aggressively entered India, undercutting the price of conventional taxis and promising drivers they could earn a lot more money. They offered sub-prime loans for people with credit scores of 500-600, so that they could buy a car. This was great at the start, with drivers earning enough money to pay the monthly instalments. But as more drivers turned towards Uber, the market became saturated, and the demand in passengers didn’t rise at the same rate. This led to Uber driver’s earning less and less, unable to pay the instalments; they borrowed increasing amounts of money to look after their families. And unfortunately, with loan sharks circling this has led to the suicide of at least two drivers.

Next we have Airbnb, a great idea for tourists going on holiday, but not so much for local people. Originally, the only people to be effected negatively were hotel owners, but soon local people were being priced out of the housing market. As Airbnb aggressively moved into new markets, using the Silicon Valley mantra of move quick before the government knows what’s hit them, local people found rents beginning to rise. Houses and apartments were being set aside for use on Airbnb exclusively, with some landlords owning up to ten properties purely to use on Airbnb; exacerbating the housing shortage crisis in a number of major cities.

We then have the issue of tax. These companies market themselves as helping humanity, and yet they don’t pay their fair share of tax. You’d think that by paying local tax it would be a great way to help local people, but in Silicon Valley alone there is a massive hole of $70bn. Apple is currently building a huge new office in Silicon Valley, some may call it a vanity project. On property tax alone, the government says they owe $6.5bn, Apple says it just owes $57m; they are disputing 99% of the value, and separately they owe €11bn to Ireland. If more and more tech companies follow suit, then where will government money come from? With tech companies on the rise, becoming some of the world’s most profitable businesses, governments are soon going to find their wallets empty.

Inherently, disrupting tech companies do not like the government. Government and regulation makes it hard for them to achieve what they want to do. And this is reflected in the fact that they don’t like to pay tax. They blame the government for getting in the way of progress, but the government is all we have to protect us from these tech behemoths, and ensure we are getting what is owed to us.

The next item on the agenda is jobs. There simply will not be enough jobs. The Tech Gods tell us to look at the Industrial Revolution, we survived and we will survive again. The Industrial Revolution was nothing compared to what is coming. Generations had time to learn new skills, it happened over 100 years, giving humanity enough time to adapt. In today’s world, jobs will start to disappear like that. AI is replacing doctors, lawyers, and truck drivers, pretty much every job apart from computer scientists. Even these will be replaced when robots can code for themselves. One solution is that people can be retrained or re purposed for higher value added roles. But where will this money come from to retrain the 3.5 million truck drivers in America, or the thousands of call centre workers in India? Yes, new jobs will be created such as computer coders etc. but who’s to say the people who lose their jobs will have the capabilities to learn these new skills? And will we need 3.5 million former truck drivers as coders? Timing is also an issue, if someone loses their job today, and let’s say they can be retrained, that will take time. In the meantime they need money to feed their kids!

Technologists are way ahead of the politicians. They are in control. Governments are focused on North Korea, Brexit, the war on drugs, and whatever Trump says minute to minute; they should be focused on these tech disruptors. Politicians need to get ahead, make sure tech is used for the people, and not to make a small rich group in California richer at the expense of the less fortunate. They claim to be helping but are they really making the world worse and at a rate that cannot be undone? Technology is amazing and can help the world, but it needs to be planned and carefully implemented.

So are we sleepwalking towards a technological apocalypse? Are the idealists ‘good guys’ who are challenging the old order or are they really tax-minimising corporations that threaten our future?

On Friday, another one bit the dust. As Snap's shares plunged following disappointing results, it became clear that the myth that a feisty young challenger to Facebook could topple the social media giant from its perch was just that - a myth. 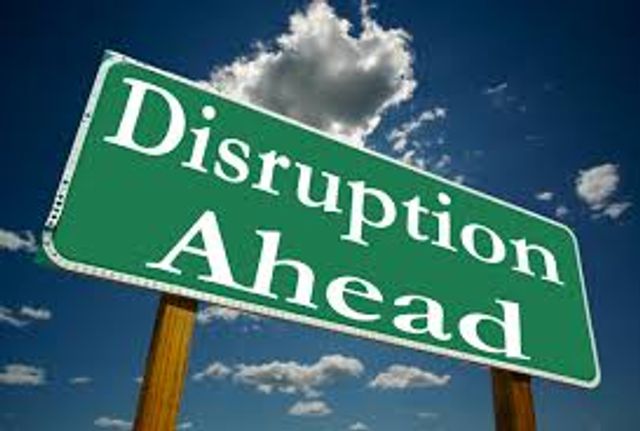 #Disruption is over - and Facebook won #digital #copycats https://t.co/f6EFotQLUl pic.twitter.com/wiY7Nfgpeq

BBC News - Disruption is over - and Facebook won https://t.co/1xfNdgSdLp

"But the truth is the social media war is over and Facebook is the winner." ruskin147 https://t.co/QHzAe7pYgu